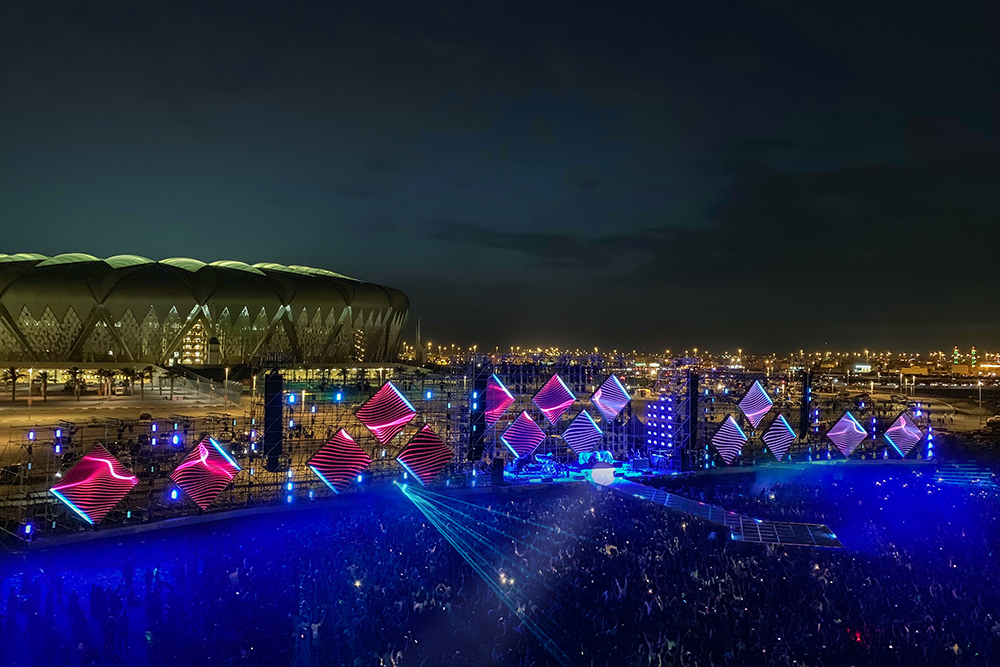 Jeddah World Fest was a record-breaking historic end to the Jeddah Summer Season. Held on July 18th, the inaugural edition of the music festival took place in the grounds of King Abdullah Sports City, Jeddah, and attracted a sell-out crowd of almost 40,000 music fans. This was the largest music festival ever held in the Kingdom of Saudi Arabia and the atmosphere was electric! Protec proudly delivered an extensive audio, lighting and rigging package for their client ‘The Manual’ on behalf of Roqu Media.

This event ties in with Vision 2030, a progressive plan which sees the country open up as an entertainment destination and relax some of its stricter laws around events. With the country’s General Entertainment Authority set to inject upwards of an estimated $60 billion dollars into the sector over the next decade, Jeddah World Fest is the first of many jaw dropping events which will fuel the AV and events sector in the Middle East. Its successful execution places Jeddah as a new concert destination for the world’s biggest artistes visiting the Middle East.
The emotional crowds witnessed stellar performances from international artistes Janet Jackson, 50 Cent, Chris Brown, Liam Payne, Steve Aoki, Tyga, Future, R3wire and Varski.

Project manager for Protec, Luke Doyle, reflects on the success of the show. “The show looked and sounded incredible. The stage structure was the largest ever seen in the Middle East. This type of event had never been done to this scale in KSA and it was a great show to be a part of for sure. Definitely one to remember! The crowd were fantastic and it was almost emotional to witness.”
Pulling off an ambitious show like this was not without significant challenges.
“As the line-up wasn’t 100% confirmed until last minute we were under immense pressure to fulfil the technical rider for each artiste. We had catered well technically for the event using stock from our Riyadh and Dubai warehouses, however, we had to move quickly to discuss the requirements with the relevant artiste’s teams and production and get the extra kit rushed into the country once the last line up was finalised. The event was also a few days behind on build schedule so we were tightly pushed on time to deliver from our side with only 2 nights for build and rehearsals. 22 crew were on site and managed to set up in two days and derig in one shift.”
Established in the region for 20 years, the Protec team know how to handle the challenges of the KSA climate.
“The extreme climate was a constant challenge. Working long hours it was imperative to keep the crew hydrated. We worked throughout the night to avoid the intense heat and humidity during the day. Hydration salts in Camelbaks and frequent water breaks kept the crew well hydrated.
Constant communication with our client and the production team (who were supportive & always positive) , good teamwork with other companies on site, long hours and a great deal of hard work from all the team led to us overcoming the weather and all the other challenges a show of this magnitude possesses delivering an incredible event that we are very proud to have been a part of.” Doyle explained.

Protec’s technical director Ed Ross talks us through the audio setup. “We chose our L-Acoustics K2 as the primary PA for the event. This was for a combination of factors, including rigging height and weight loading. The PA comprised of a main left and right hang of 23 K2 each and two large outer hangs of 4 x K1-SB, 13 K2 and 6 Kara per side, as the venue was very wide. Two small hangs of Kara were used behind the follow spot towers just to fill out the dead spots in that area. 32 x SB28 subs were used in a sub arc configuration, with Kara frontfills. The power to weight and size ratio of the K2 made this perfect as we were able to hang very large hangs as the main left and right to get the throw needed without main delay towers which the client didn’t want.”

Protec chose all DiGiCo consoles; SD7, SD10 and SD11 were used at FOH and an SD5 and SD10 at monitors. They also provided all the DJ equipment which was primarily 4 x CDJ 2000 Nexus and DJM 900 Nexus.

“We had 20 channels of Sennheiser 2000 series IEMS and 16 x L-acoustics 115xtHIQ wedges for use by all the artistes, as well as large sidefills of L-acoustics ARCSII and SB28 onstage.” Ross added regarding the onstage package, “We had a mixture of Shure Axient and Sennheiser wireless microphones along with a complete package of top end wired microphones from Shure, Sennheiser, Neuman, DPA and AKG.”

The audio team faced a reduced setup time and worked through the night due to the intense heat in order to get everything perfect. With rehearsals continuing right up to show day, the team showed dedication and tenacity in the face of challenging circumstances.

Richard King, director of The Manual sums up the event nicely with these final words,
“When our client Roqu Media came to us with the brief for Jeddah World Fest we knew it was going to be an important moment in history throwing Jeddah into the international media spotlight. Jeddah World Fest was the first of its kind in many ways, the first festival in Saudi Arabia, the first large scale outdoor show, amongst many other ‘firsts’. We created a historical moment where the audience came together to produce an experience never before seen in market. When creating the show it was essential we used excellent suppliers, like Protec, who are known for their reliability and huge inventory available locally, it’s not suppliers you need when producing shows like this, it’s ‘partners’, and that’s what Protec became. With 20 years’ experience in the region they confidently coped with tight deadlines and changes to riders and pulled out all the stops to ensure Jeddah World Fest put Saudi on the map as an entertainment destination. Consummate professionals, they are an excellent choice for any event. The Manual looks forward to working with Protec again on next year’s production which will be even bigger and better!”